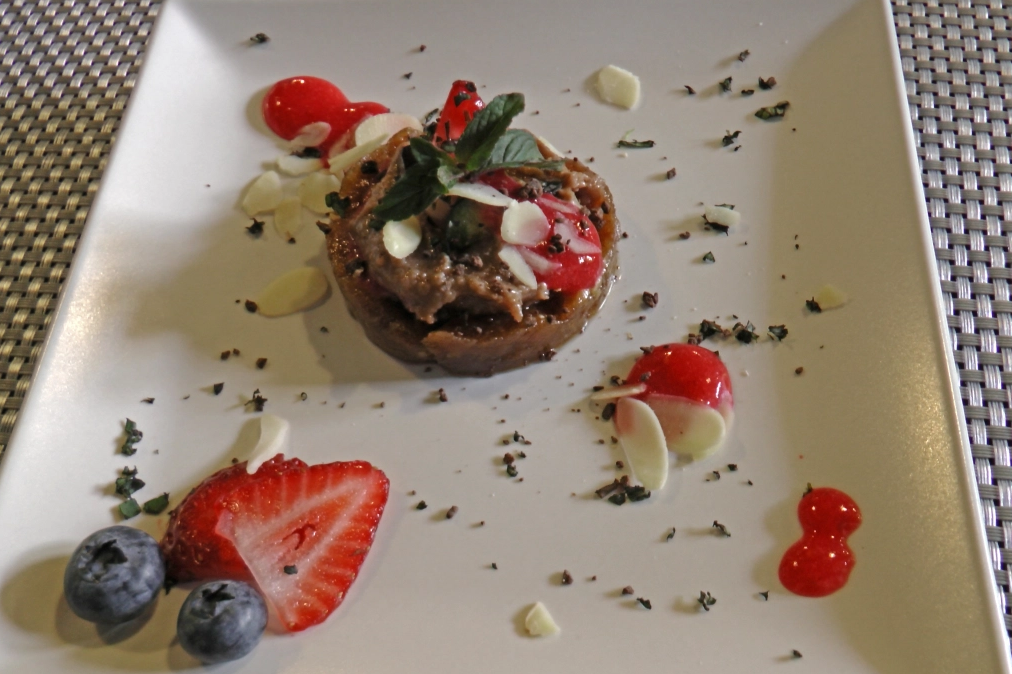 Sun, sea and island parties are the images that immediately spring to mind when thinking of the beautiful Balearic islands and particularly, Ibiza and Mallorca. But the islands offer so much more. While the beaches are indeed one of the main attractions, we can now enjoy fantastic vegan food everywhere whilst naturally getting our Vitamin D. However, care is needed with that strong sunshine, which I experienced on my penultimate day whilst attempting my first Triathlon (mentioned at the end of this blog).

In May I was cordially invited by the founders of Mallorca Vegan, Stephanie Prather and Manuel Lynch, to sample the many vegan menus across the island. I was pleasantly surprised to find foodies, and moreover vegan foodies, virtually everywhere. The standards of the vegan cuisine on offer are fantastic, and I have to admit many of the restaurants outperform those in the UK (I’m sorry, there are many wonderful UK vegan restaurants too, but Mallorca is just… different!). Who would have thought Mallorca would become Europe’s number one vegan holiday destination, and how did this happen?

My whirlwind gastronomy tour of the island took me to four towns, and in Palma alone I was served the most wonderful vegan food, in five places during three delicious days.

On my first morning we visited the Bagel Café in Palma, which has the best fresh bagels, croissants, pastries and coffee in town, including gluten-free options from less than €2 to around €8. The majority of the choices on the menu are vegan or can be made vegan. Owners Andrew and Stephan have introduced thousands of people to veganised versions of what most people are used to, including a vegan ‘ensaimada’ pastry (traditionally made with lard). Their reputation is further enhanced by their stylish café ambiance, featuring high beams, a mezzanine and cosy seating arrangements. With relaxing Balearic music playing in the background, this an ideal place to hang out for breakfast, brunch or lunch.

Jasmijn, Stephan and Andrew at the Bagel Café

Healthy and delicious breakfast at the Bagel Café

In the afternoon we went to the Sabor (‘flavour’) Vegan Culinary Academy, founded by Stephanie, which raises standards in plant-based chef training. Very reasonably priced chef courses from 4 days to 4 weeks run throughout the year (sabormallorca.com).

The first graduating class of chefs showed off their skills by creating the most wonderful and amazing vegan dishes. Seven internationals, who called Mallorca their home but hailed from the USA, UK, Germany, and Hungary, loved their training, along with their local Spanish counterparts. Most of them had no prior culinary training. They had started their level 1 vegan molecular culinary course in February. Around 70 hours of taught contact time and homework that included learning about health, flavours and culinary techniques had made these students into competent and very creative plant-based chefs.

We were presented with a fantastic seven-course Mediterranean degustation lunch. Senses were aroused by flavour, texture, and creative presentations of intriguing sounding dishes, such as Collision at HollyRoot and Vine, Cuban Romance with Brazilian Colours, From Land to the Sea and Tartly Insane. Gastronomy techniques I had never heard of were skilfully applied. The Santanyi Triple mushroom shots, for example, were wonderful. Batter consisting of pureed asparagus and another one containing sweet potato was scooped up and placed in a liquid mixture of algae. A membrane formed on the outside while the asparagus and sweet potato remained liquid on the inside [see video]. Drinking the ‘shots’ resulted in the balls bursting open in one’s palate providing a very interesting sensation. ‘Spaghetti’ made from almond meal and other ingredients were presented with ‘sweetballs’, made of raw dates, nuts and other ingredients, which were then very briefly deep-fried. It was amazing.

Collision at HollyRoot and Vine (at Sabor Vegan Culinary Academy)

From the Land to the Sea in preparation (Vegan paella, at Sabor Vegan Culinary Academy)

The lunch guests included three chefs of a Michelin star hotel; a radio presenter; the Editor of the Mallorca Daily Bulletin; Tony Rodriguez, the head chef of the oldest vegetarian (now vegan) restaurant in Mallorca, Bon Lloc; Svenja Gallé, head chef of Bellaverde Restaurant; General Manager Sven Rausch of the 4-star hotel Valldemossa; the Director of Tourism; and raw food goddess Mimi Kirk, who was named ‘sexiest vegan over 50’ at the age of 71, by PETA, several years ago.

That evening we were pampered, once more. Of 133 restaurants in Port de Pollença, vegetarian and vegan Bellaverde restaurant ranks number one on Tripadvisor. Head Chef Svenja Galle has built up standards over the past three years and now enjoys a fantastic reputation. She aims to create vegan food that non-vegans really enjoy, that takes them by surprise, and make them want to come back for more. It is a place where people feel happy and relaxed. It is set in a romantic courtyard under 80-100 year old fig trees, accompanied by very friendly staff, as well as cats and dogs, which have been rescued by Coloma, who runs the lovely Pension Bellavista adjacent to the restaurant. Accordingly, Bellaverde is a major vegan hotspot. The inspiring haute cuisine dishes include as many locally sourced and sustainable ingredients as possible. The bread and olives were served with olive oil from 100-year old trees. I tried the delicious fresh truffle paste spaghetti, and my partner had the sweet potato filo pastry with sautéed spinach, cherry chutney and edible flowers. The vegan wines are clearly marked, and the desserts were to die for (we shared three between the two of us). Prices range from €6.50 for starters, and from €12 up to around €25 for mains.

After a healthy and tasty Bellaverde breakfast and a yummy muffin the next morning, we made our way to the mountains where an amazing 5-course lunch was being prepared at four-star Valldemossa Hotel and Restaurant, which has magnificent views over the hills and valleys. Manager Sven Rausch is one of several at top end Mallorca hotels and restaurants who have embraced the vegan and vegan-curious visitor. Their reputation extends to Germany and beyond. Chef Ricardo had crafted two beautifully presented starters, two divine main courses, particularly the special risotto, and a mouth-watering dessert tasting including balsamic strawberries with mint gel, ‘Piña colada’ foam, chocolate cake with vanilla crème and Brazil nuts, and a touch of fruit tartar with ‘Pisco sour’ foam. Call ahead for an experience that will make you want to stay there forever.

Our tour continued that evening, with Kerstin Hering at Cantina Vegana. Kerstin has made an art of veganising local Spanish dishes and tapas, such as ‘sobrasada’, a traditional meat dish, which is a great combination of sundried tomatoes, spices and nuts, at Cantina Vegana. The mushroom ‘anchovies’, and homemade succulent vegan burgers are also best-sellers. Her juices and green smoothies are legendary. Kerstin commented that being in the business district of Palma meant that her clientele mainly consists of non-vegans who love the food so much, and keep coming back for reasonably priced healthy brunch, lunch and dinner options, ranging from around €4 to €12.

On the third day we visited the oldest Mallorcan vegetarian restaurant (now completely vegan), Bon Lloc, founded by Juanjo Ramirez, who offers everyone a warm welcome and infects you with his smile. I had expected tasty but relatively simple dishes. However, I couldn’t be more wrong. Each dish is prepared with skill, talent and above all, dedication, by international high-end vegan chef, Tony Rodriguez, who creates the most wonderful raw and cooked dishes offering an adventurous menu. Hidden in the raw cannelloni that I tried was the richest creamy cashew paste I had ever tasted. I am highly motivated to buy one of Tony’s best-selling books. If you visit Palma, Bon Lloc is a must-stop destination. Prices vary from around €8 to €25.

More raw vegan goodness came my way the next day at Ziva to Go, run by charming Swedish Petra Wigermo, who has a substantial following of both locals and internationals who have made Mallorca their home. A wide range of smoothies, juices, raw ‘burgers’ and ‘lasagne,’ as well as delicious chia seed porridge, spicy Mexican red cabbage salad and other amazing raw delights, feed the body and soul. Petra echoed Kerstin’s words and mentioned that many of her non-vegan patrons keep coming back as they just love the food. Drinks and food start at around €3.50 up to around €9 or €10.

Jasmijn and Petra (at Ziva To Go)

‘Taste of the Mediterranean’

We ended the gastronomy tour, but not our stay, by visiting the Sabor Culinary Academy once more for a tasting event. Vegan versions of traditional dishes of 21 Mediterranean countries were served to around 60 people, including savoury and sweet treats, such as Greek dolmadas (stuffed vine leaves), flatbread and hummus from Syria, French mini quiches, creamy fake oysters, broadbean falafel from Cyprus and celebratory Hamantash (a triangular pastry stuffed with prunes) from Israel. The public verdict was unanimous; stunning food!

Vegan ‘Oysters’ (at ‘Taste of the Mediterranean’)

After four days dedicated to just eating, my very overfed partner and I had been entered into the Mallorca Olympic Triathlon the next day. We feared we might sink during the 1.5 km ocean swim phase, but despite virtually no training, and never having swum in a wetsuit, or in fact doing a triathlon of any kind, we somehow managed to finish in respectable times. Compared to the top international triathletes present my result at just under three hours was nothing special; however, even finishing it, not coming last, and, more importantly, having hardly any pain afterwards, can only be attributed to a vegan diet, and in particular, all the amazing vegan food we had enjoyed during the previous week. Clearly vegan food is not only delicious, but seriously good for you too. Next year I hope we can field a large vegan team in the triathlon as it is amazingly good fun, and the best part is gorging on vegan food for days prior to the event, which I now consider an essential part of my preparation.